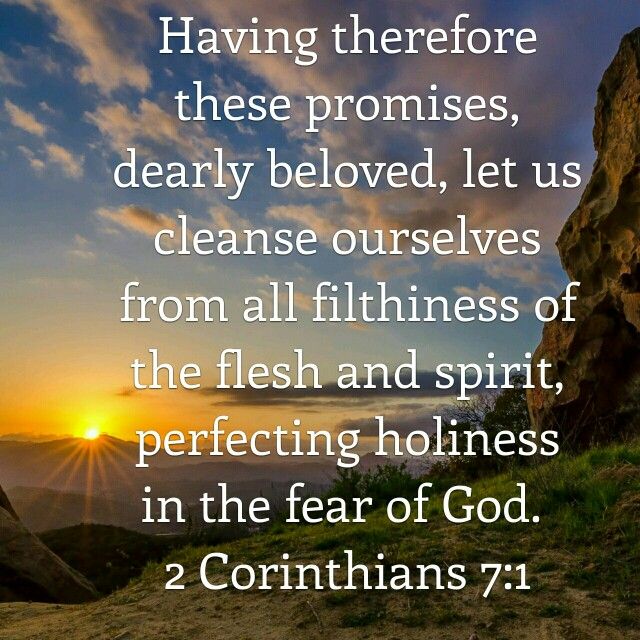 Having therefore these promises
That God will walk in his temple, and dwell in his churches, be their God, and they his people, that he will receive them, and be their Father, and they his sons and daughters; which promises they had not in hope, as Old Testament saints had the promises of the Messiah and his kingdom, and as New Testament saints have of the resurrection, the new heavens and new earth, and of appearing with Christ in glory; but in hand, in actual possession; for God was really become their God and Father, and they were his people and children; they had had communion with him, and were received, protected, and preserved by him; which promises and blessings of grace, and which are absolute and unconditional, the apostle makes use of to engage them to purity and holiness; and is a clear proof, that the doctrine of an absolute and unconditional covenant of grace has no tendency to licentiousness, but the contrary: and that his following exhortation might be attended to, and cheerfully received, he uses a very affectionate appellation,

dearly beloved;
so they were of God, being his people, his sons and daughters, adopted, justified, called, and chosen by him; and so they were by the apostle and his fellow ministers, who, as he says in a following verse, were in their hearts to die and live with them; some copies read brethren, and so the Ethiopic version. The exhortation he urges them to, and, that it might be the better received, joins himself with them in it, is,

let us cleanse ourselves from all filthiness of the flesh and
spirit:
by “the filthiness of the flesh” is meant external pollution, defilement by outward actions, actions committed in the body, whereby the man is defiled; such as all impure words, filthiness, and foolish talking, all rotten and corrupt communication, which defile a man’s own body; as the tongue, a little member, when so used does, and corrupts the good manners of others; all filthy actions, as idolatry, adultery, fornication, incest, sodomy, murder, drunkenness, revellings and everything that makes up a filthy conversation, which is to be hated, abhorred, and abstained from by the saints: by “filthiness of the spirit” is meant internal pollution, defilement by the internal acts of the mind, such as evil thoughts, lusts, pride, malice, envy, covetousness, and the like: such a distinction of (Pwgh tamwj) , “the filthiness of the body”, and (vpnh tamwj) , “the filthiness of the soul”, is to be met with among the Jews; who say F18, that when a man has taken care to avoid the former, it is fit he should take care of the latter; they also call the evil imagination, or corruption of nature, “the filth of the body” F19. Now when the apostle says, “let us cleanse ourselves”, this does not suppose that men have a power to cleanse themselves from the pollution of their nature, or the defilement of their actions; for this is God’s work alone, as appears from his promises to cleanse his people from their sins; from the end of Christ’s shedding his blood, and the efficacy of it; from the sanctifying influences of the Spirit; and from the prayers of the saints to God, to create in them clean hearts, to wash them thoroughly from their iniquity, and cleanse them from their sin: besides, the apostle is not here speaking either of the justification of these persons, in which sense they were already cleansed, and that thoroughly, from all their sins and iniquities; nor of the inward work of sanctification, in respect of which they were sprinkled with clean water, and were washed in the layer of regeneration; but what the apostle respects is the exercise of both internal and external religion, which lies in purity of heart and conversation, the one not being acceptable to God without the other; he is speaking of, and exhorting to the same thing, as in the latter part of the preceding chapter; and suggests, that it becomes those who have received such gracious promises to be separate from sin and sinners, to abstain from all appearance of sin, and to have no fellowship with sinners; to lay apart all filthiness and superfluity of haughtiness, and, under a sense of either external or internal pollution, to have recourse to the fountain opened; to deal by faith with the blood of Christ, which cleanses from all sin, of heart, lip, and life; and which is the only effectual method a believer can make use of, to cleanse himself from sin; namely, by washing his garments, and making them white in the blood of the Lamb:

perfecting holiness in the fear of God;
by “holiness” is not meant the work of sanctification upon the heart, for that is wholly the work of the Spirit of God, and not of man; he begins it, carries it on, and perfects it of himself; but holiness of life and conversation is here designed, which in conversion the people of God are called unto, and which highly becomes them: and this they are to be “perfecting”; not that a believer is able to live a life of holiness, without sin being in him, or committed by him; this is in, possible and impracticable in the present life; but the sense of the word (epitelountev) is, that he is to be carrying on a course of righteousness and holiness to the end; to the end of his life, he is to persevere as in faith, so in holiness; as he is to go on believing in Christ, so he is to go on to live soberly, righteously, and godly, to the end of his days; which requires divine power to preserve him from sin, and keep him from falling; and the grace of God, the strength of Christ, and the assistance of the Spirit, to enable him to perform acts of holiness, and the several duties of religion, and to continue in well doing: all which is to be done, “in the fear of God”; not in a servile slavish fear, a fear of hell and damnation, but in a filial fear, a reverential affection for God, an humble trust in him, and dependence on him, for grace and strength; it is that fear which has God for its author, is a blessing of the new covenant, is implanted in regeneration, and is increased by discoveries of pardoning grace; and it has God for its object, not his wrath and vindictive justice, but his goodness, grace, and mercy. This shows from what principle, and upon what views believers act in a course of righteousness and holiness; not from the fear of hell, nor from the fear of men, or with a view to gain their applause, but as in the sight of God, from a reverential affection to him, a child like fear of him, and with a view to his glory.